Glad to see This 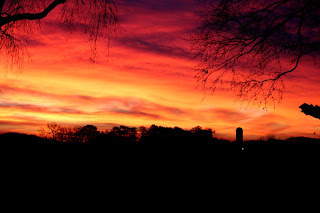 So, this morning, I saw this after I finished in the shower and headed upstairs to get ready.  This was such a beautiful sight, I had to make a detour to catch this with my camera.  This picture also reminds me of a story from today at work.  I don't often share work stories, but there are two funny ones from today.

The first was out at a farm with some landowners.  I had taken my massive camera with me to capture some specific details to take back to the office.  On the 5th picture I peeked at my camera to make sure I caught the exposed tile line well enough in the shadows.  It was then that I realized my camera card wasn't in my camera.  Once I got past the embarassement of not being prepared, I became a little anxious.  Seriously, where did it go?  I remembered taking it out of my laptop and knew that I had to put it my camera.  I forgot about the pictures I took after that.  When I got back from the field, I searched high and low.  How could I have lost it?  How many pictures were on it that didn't get downloaded?  Where did it end up?  Back at my office, I sent Ryan and warning email about the lost card.  His reply grabbed at my emotions in two ways.  I was GLAD that the card wasn't lost.  But I was frustrated that I didn't communicate with him that I was taking the camera.  He saw the camera and thought it was a perfect opportunity to get pictures off of the card.  So, he grabbed the card out and  put the camera back on the steps.  If I only would have known.

Now sharing one work story made me think of another one.  It deals with a slight paranoia that I have.  I'm afraid, slightly, that something will happen when I'm in the field by myself.  Something like an accident.  Well today I pulled into a field where a truck was parked next to the driveway.  It's deer hunting season here so its not abnormal to see random vehicles parked on the side of the road.  I unlocked the gate and headed in the field.  As I was leaving the field, I saw dust but for some reason smelled smoke.  Now, I don't think I really smelled smoke but rather I was afraid I did.  Two falls ago (I can't link right now) I was in a field with a landowner when a corn stalk got caught up under neath the truck and the heat from the catalytic converter caught the stalk on fire.  So two years ago as I left the field, it acted like a drip torch setting the whole field on fire.  So, you can imagine my anxiety today when I thought something was burning.  I stopped the truck and started to get out to look but then remembered that last time I was encouraged to just get out of the field.  So, imagine me driving through a crop field like a mad-man (no need to be politically correct here) not wanting to light the field on fire.  I was so THANKFUL when it was indeed just dust.

Makes me think of a specific verse that I've been praying for a friend: Do not be anxious about anything, but in every situation, by prayer and petition, with thanksgiving, present your requests to God. Philipians 4:6

I should remember that verse when I'm driving through the field like crazy and when I think I lost my camera card.  Oh dear, I have a lot to learn!