When my car broke down, Scott walked around saying "Darn Cheby's, mommy's car broke". He told everyone about it. Let me add to the Darn Cheby's story...
This week Ryan's vet truck wasn't wanting to start. And because he uses all the time for work, he immediately made an appointment to get it checked. You'll never guess what the diagnosis was. Yes, his fuel pump!!! So, now we've replaced the fuel pumps on both of our Chevy vehicles in the past week. And we bought both of them within a month of each other too. Interesting... does Chevy make them to go out on purpose so we can spend $700 to get them fixed? I agree with Scott - DARN CHEVY'S!
Written by Tamara B at 2:22 PM 4 comments: 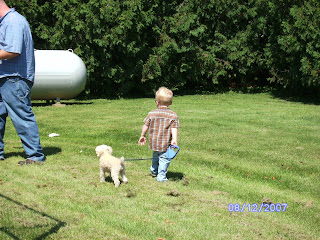 Ryan has to walk dogs that board at the clinic. Here Scott is walking Zachary, my folks' dog who hates to board but didn't have a choice. Scott also walked another toy poodle that happened to be boarding and loved it. He cried when he couldn't walk Moses, the besinji, that bites. He whined about it the whole way home! 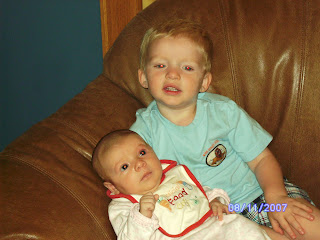 Not a pretty picture at all but the only one I had on my digital of the two of them. Bethany sure is growing and starting to look different in the face. 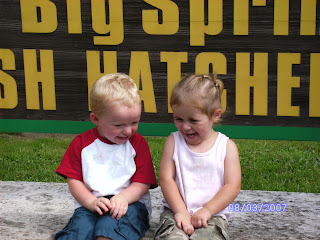 Scott and Drew giggling in front of the sign. I thought I had a different picture where it looks like Scott is whispering in her ear. 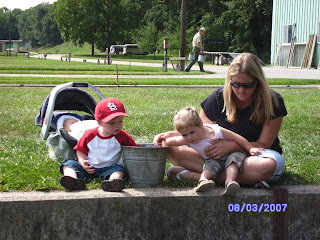 Scott and Drew feeding the fish while Bethany sleeps in the background and Tebbe holds the kids from falling into the 45 degree water. This shows the bucket of food they gave us. It pays to know someone :) 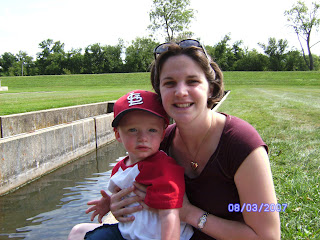 Sitting along side the fish "tank" at the hatchery. I do have the cutest little boy! 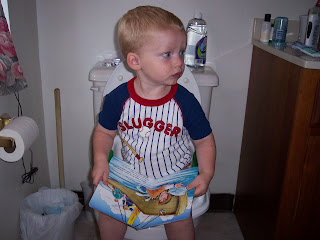 The only way we could get him to sit on the "big boy" toilet at first was to give him a book to read. This kid loves to read! 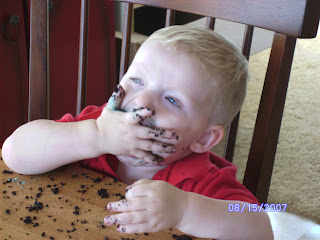 Cupcake fun during play day. It was quite the mess to clean up.

Okay, so its been a while again. And today I had a brilliant idea to come to my mom's house even though they're in California, to post a few stories and read up on a few things. I also planned to make a postcard to send to my mom and Ralph in California. So, I dragged the two kids to town and my effort has been somewhat pointless. I downloaded my new digital camera yesterday and only left pictures that I needed to print off to scrap book. So, I have one crappy picture that I could share and now a crying baby. But, I think she'll fall back asleep so here's an update.

First off, out of nowhere, my mom's computer is playing music and I have nothing open... weird!

Tebbe's Visit
One of my best buddies came out for a weekend visit. She brought her daughter is who is just a few months younger than SCott. They played wonderfully together and I was so glad to spend a few quality hours with my friend. It rained when we wanted to play outside and was really beautiful weather otherwise. Our kids visited the nature center. Scott was scared to death of the live turtles and wouldn't get close to the stuffed bear or moose while Drew loved everything, even the turtle that pee'd all over the place twice. We also visited the local trout hatchery. I work with these guys all the time but in five years here had never actually been to the hatchery. The kids were spoiled with a bucket of food to feed the fish rather than paying a quarter for a few morsels. They fed the brood trout and loved every minute of it. That afternoon we stopped at my moms where the kids went swimming in Scott's little pool. That was the only thing that didn't go over so well. When both kids got out, the water was dirty and I quickly learned that it wasn't from them getting in and out but rather from MY kid pooping in his little swimmy! Yeah, that was a fun diaper to clean!!!! We did find a few minutes to go out and take pictures in the wild flowers of the rolling hills just down the road from my house. (pictures to come, hopefully)

6 week check up
I had my regular check up with the doctor. I was cleared to do everything I want to do :) She also gave me another 10 days off because my mom (aka daycare provider) is on an emergency trip to California. So, instead of finding someone to pawn my kids off on when Bethany still isn't taking a bottle so well, I get to stay home with them.

Leaving the check up was drama
(okay baby is crying again and Scott has climbed upstairs and is hollering down at me... we'll see what I get typed) It was a quick trip to Dtown for a check up. I took one of the HS girls with me to watch Scott during the appt. As I was stopped at the clinic drive to turn out on the highway, my car leaped forward even though I hadn't taken my foot off the gas. Long story short, my car died in the turn lane of the highway. It was hot, I had two kids in the car and didn't know who to call. With a little help from a friend, a toy truck was on the way. Can you say that you've ever ridden in your car on the back of the tow truck? After suggesting I sit and wait with two kids, a HS girl and an emotional me, they gave me a loaner car. Why would I be emotional anyway, I did just have a kid, right? I also didn't have my credit card, had one check in my check book and was over tired. To top it off, my mom called me while I was on the tow truck to tell me she missed me already. I was so frustrated I cried. And the drama didn't end there, that night I jumped out of the loaner car to drop off some squash to a friend. I returned to a LOCKED car! Yes, I was freaking out. A 40 minute drive, 630pm and the doors were locked. Scott was asleep but Bethany was crying her head off. I said a quick prayer and grabbed the handle on the back door to find that it was open. THANK YOU GOD! After all that, I picked up my car two days later and upon paying the dealership $690 (thank you retirement account), I drove my little Cavalier home. Whew-wee.

Two Days, Two Kids, Too Much Crying
Who knows what Bethany's deal is. I kinda think that she's just spoiled. But she's been whiny and crying the past few days. And that's manageable. But when my two year old is doing the same thing, it's a bit much. Scott has had a snotty nose and had his fingers in his mouth; maybe its his two-year molars? All I know is those two days were not fun-filled and I was thankful when my husband came home and could help with the crying babies. Now, a few days later, Scott's nose isn't as bad and its not teeth. He must have had a cold.

Oh, Tomorrow
Tomorrow is a new day. I may have to go into the office for a bit, which is fine. And then tomorrow night is girls night out. Of course, I'll take my attachment which is easier than pumping at this point. But Scott, he'll stay with his dad. I'm excited.
Written by Tamara B at 2:57 PM 9 comments: 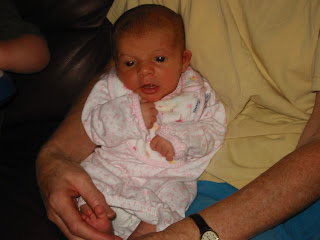 Yes, we are alive

It's been a long time since I've sat at the computer. So much so, that I had to cut my nails to be able to type without hitting multiple keys at once. I've been home for 5 weeks now and it's been wonderful but fast. Little Miss Bethany is growing like a weed. She is sleeping through the night like a champ. Only, I still wake up fearing that she's not breathing because it's been so long. By this time, her food supply is overflowing and I'm more than ready to pump before she can eat.

My inlaws have been here for a few weeks now and we've thoroughly enjoyed our time with them. Its been good having them near yet not under the same roof. They are wonderful, don't get me wrong, it's just good to have a few hours here and there to do my own thing. I really appreciate their understanding. They leave tomorrow and as they leave, we head down to pick up one of my best buds at the airport for a long weekend. I'm super excited to have her here as well as her daughter who's the same age as Scott.

We just got done with our "play day" at the park. It's fun but man, those benches are rough on my hiney! I really enjoy being able to do the mommy thing and might have to consider taking off early on a regular basis on Wednesdays so I can "play" with my buddies too.

I'm currently copying pictures to a disk for Ryan's folks. The time remaining is 20 minutes. Yup, its tons of pictures. I might as well run to the grocery store while it copies! But, nah, I think I'll take a quick visit by some of your sites because I miss my internet friends. In the mean time, here's a picture:
Written by Tamara B at 4:21 PM 3 comments: