We heard the baby's heartbeat for the first time last night. It was exciting but also scary to know that there were concerns. Now that I'm into my 2nd trimester and they have a heartbeat, I think the concerns are limited if not gone. I do have these cramps though that are killer. Sharp pains on both sides, right where my ovaries would be. Based on my two previous ultrasounds, the doc thinks the sharp pains are caused by the cysts that are developing on my ovaries. Sounds bad but its really not. They kinda grow and dissapear and then grow again. Its fairly common. Last night's appointment was fun and as always, it was good to see the clinic staff again and watch them "ooh and awe" over small fy who is quite the little flirt!

We leave today for the B family Christmas. It will be fun and I'm glad to see the in-laws again but I'm not looking forward to a 3.5 hour drive. Thankfully, I'm not one of those stuck in an airport right now!

I'm tired today. Yesterday was a good time hanging out with some of the college kids who are home. Last night hubby had guy time. They ended up at our house playing xbox in the basement and yelling their heads off. A few of the college girls also came over and I tried to stay awake while we watched a movie and they were there until after midnight. I was feeling crappy on the couch from not eating enough supper. No fun. It was good to visit with the girls although I didn't get my dishes finished, my laundry finished or any packing done. Oops :)

Wishing you a Merry Christmas as we celebrate the birth of our savior!
Written by Tamara B at 10:33 AM 4 comments: 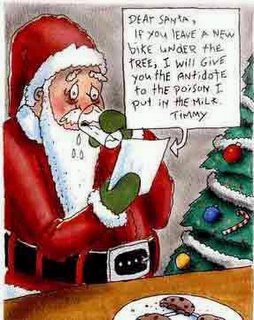 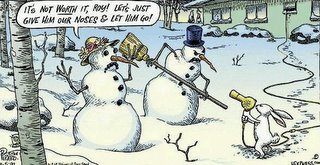 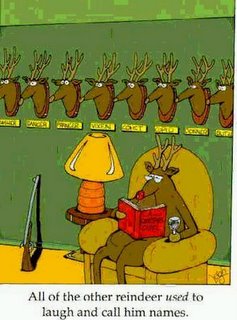 Never Boring at our House

The weekend started out okay. I had a good week at work and felt good most the week too. Friday night, I worked late until our work Christmas gathering. It was the first time we’d done so and it was good to get together. We all met for a meal and it was fun to talk to spouses, etc but I wish we’d had it at someone’s home so we could more comfortably sit around and chat. My fish was super salty and hubby’s steak was gross. That was the normal part of our weekend.

Saturday morning, I took small fry for a hair cut and then we rushed to get the kitchen clean after ignoring the dishes all week. K was coming over after lunch to bake with hubby. Shortly after noon, I called K to see what time she was coming. She wasn’t. Good reasoning though. K had a friend show up on her door step from many miles away and she was now busy. I was glad that K could see Danny but bummed because I knew that hubby was looking forward to the baking. That, and he doesn’t do well when plans change last minute. Of course, hubby was disappointed. He kinda moped around a little bit and I was irritated with him. I tried to be understanding and supportive. Then mom called and invited us to supper. Hubby didn’t want to go. Now, normally I would be okay with that and just stay home with him. This time, I wanted to go for supper and so I planned to do so. I called mom back and told papa that hubby was staying home but that small fry and I would be there. I failed to mention those details to hubby. Our trip to Walmart got set aside and he eventually went upstairs and napped and I kinda sat around in a daze – not wanting to put up with a prune for a hubby. Hubby awoke and after discussions of schedules and the need to go to wally world, he decided he wanted to go – at 330. By now, I really needed to tell hubby of MY dinner plans. I took a quick shower and by 4pm, we were on the road. A quick call to mom and I understood that she wouldn’t wait on me for supper. So, we did the run to Aldi’s and wallyworld. My scheming at this point was to have hubby drop me off at mom’s and she could later take me back home. He still didn’t want to eat supper there. When I asked about the situation, he was going to go home and bake. I asked him not to do so without me and he agreed to wait, which then led in agreement to go to mom’s with me. We got there at 7pm, chatted a while, ate wonderful chicken enchiladas and started to play cards. We hardly finished the first hand when hubby said “we need to go home now”. Not much down the road, I was pulled over on the side and he was puking.

That was the start of our fun. Shortly after midnight, hubby said he needed to go to the emergency room. I jumped up grabbed some stuff for the diaper bag, woke up the kiddo and we headed out the door. In a short period of time, things had gotten worse. I’ll spare the details – he was sick. And his blood pressure was something like 80 over 50. I think that was as he passed out! They of course admitted him some time later and I headed home with the kiddo. By 3am I was back in bed, after starting a load of puky laundry! Sunday was a hectic day. I was lacking sleep, small fry needed a nap, we had a meeting at church and hubby was lying in a crappy hospital bed! I made several trips to the hospital that day. I did go home for a break. The nap never happened but I did chat with Ben and Preston who were there playing xbox. And because I couldn’t get my headache to be any worse, I decided to go out and shoot clay pigeons. Yes, me. I had never even shot a shotgun before. I quickly learned how to load it, aim and shoot. I did good too! After that I sent the boys home, ate a quick bite, went to pick up the kiddo from his grammy’s and headed back to the hospital. It was a long day. The next morning my plans were to be at the hospital by 630. At 620, hubby called and woke me. I hit snooze on the alarm so many times that it quit going off! Later that morning hubby was released from the hospital. I picked him up, dropped him off at home and headed to work.

I was at my desk by 1045am – a wee bit late! Headed to a luncheon and was gone from that early not feeling well. Snuck over to the chiropractor for a quick adjustment and was home and asleep on the couch by 3pm! Yeah, long day at the office. All of this to say that I’m tired and in need of sleep yet I have so much to do. Add to all that that I’m 11 weeks pregnant and tired anyway and puky anyway and these past few days have been loads of fun! Yes, I said it. I’m pregnant. Baby #2 is due July 1st.
Written by Tamara B at 5:13 PM 6 comments: 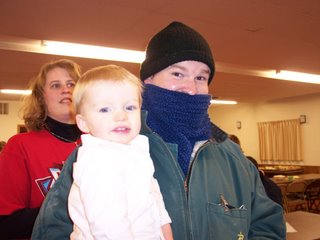 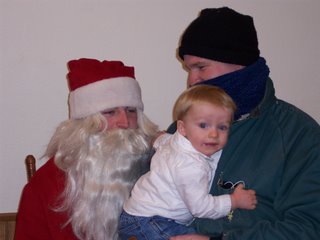 Small fry was scared of Ben, I mean, Santa. Ben had just held and played with the kiddo during church nursery earlier that morning. He didn't care if the voice was familiar so Dad sat on Santa's knee and gave his own Christmas wish.
Written by Tamara B at 4:39 PM No comments:

Received an email today from a kinda-sorta co-worker out in DC. We work for the same agency which is all over the nation. His email said "do you have a myspace?" What? Why, does he want to know if I have a myspace? Weird.
Written by Tamara B at 4:34 PM 6 comments:

It’s that time of year around here. Nope, I’m not talking about Christmas. It’s shotgun season for deer hunting around here. And because where I live is so rural, beautiful and full of wildlife, it also becomes hunter’s heaven this time of year. Deer hunting has been happening for quite some time with a bow and arrow but Saturday was the start of shotgun season. On the 6 mile drive from my house to town, there were vehicles parked in every farm-field driveway. Everywhere you looked there were groups of guys wearing their camoflauge with their blaze orange vests. It becomes slightly uncomfortable when everywhere you drive you seen guys carrying shotguns, walking through fields aiming guns or dressing deer. I was glad to be safe and WARM inside my car as we traveled down the roads this weekend.

Not everyone is so fortunate though. My coworker, Dwight, and his wife, Kristie, had a very close call. They live on a farm several miles out of town. Kristie was just about to the house when she saw a group “driving” the deer. She got in the house and debated on moving their horses to the barn when her phone rang. She stood in the door looking out for the hunters while talking to her sister. Just as she stepped away, a deer slug came flying into that exact door! It hit at the top where it protruded through ¾” of steel. Had the shot been 6 inches lower, it could have been deadly as that was exactly where Kristie was standing. It’s against the law to be shooting towards the highway, which the hunters did, and to be within 200 yards, which may have also happened. When the sheriff and DNR guys arrived to question the hunters, they denied everything. Of course, Dwight has a door with a massive dent and a deer slug to prove otherwise. Fortunately nobody was hurt.

Its interesting how some people, not everyone, can be so careless with a gun just for the sake of shooting a stupid deer. I’m debating on putting an orange vest on my goat for the next two weeks!
Written by Tamara B at 2:37 PM 5 comments: